Google Ads, a staple of most eCommerce stores based in Australia. Many think no one clicks them, but trust me, they do.

They come in many forms, from Search Ads, Shopping and Display. Although they can be trick to learn at first, it’s worth it!

Oooooooh that wrappt feeling when you work out how to make sales from one marketing channel, like Insta, Google or Facey Ads.

You’ve found the magic formula and keep cranking it up, and more sales keep coming in.

BUT, what if you weren’t able to use that advertising anymore?

It happens ALL the time and you should be prepared for it.

Google regularly updates it’s organic ranking (SEO stuff) algorithm, which can cause big drops in your rankings and subsequent visitors.

Now imagine if your main source of visitors gets cut off suddenly.

Why diversify where your visitors come from?

If the worse does happen, then you need to have a backup, while you fix the issue.

At some point your eCommerce store will experience an issue that will stop some visitors coming to your site.

That means, your sales are very likely to drop off. Therefore you need to make sure you’re getting visitors from multiple marketing channels.

Ideally you want a mix of the following sources of visitors

The percentage is different for each business and there is no magic formula.

However if your traffic is diversified then your eCommerce store will be more resilient to when an issue does arise (because an issue will happen at some point).

I’ve seen to many good eCommerce business go under by relying too heavily on one source of visitors. Don’t be one of those!

Ah the old good US of A. The home of fast food and over confidence.

They speak the same language as us Aussies, so surely we just turn on some Google Ads in the US and off we go?

Successfully expanding sales to the US is a big job.

You’re smart, so you’re selling products you stock meaning you can deliver quickly (because drop shipping is only for galahs who think they can get rich because someone on a Facey ad they said you could, and why would they lie?). Delivering quickly keeps customers happy and coming back.

Therefore to sell in the US you need stock there. Which means splitting the stock you hold here in Australia, which will limit your sale here.

Selling to US is like selling to 50 different countries. Each state has different import and tax rules. There is this really painful thing called Nexus, which basically means you collect the US equivalent of GST for each 50 states you sell in.

If you’re massive fan of paper work and bureaucracy then it’s right up you street. Otherwise, avoid untill you can.

That adspend isn’t going to go far, it will be spread too thin.

It will be about as effective as trying to put out a bush fire by pissing on it!

Are you ready to start selling in the US?

This is the real question you want to ask.

Have you maxed out all sales in Australia first? Has this generated a large pot of cash to buy more stock and run some big ad campaigns there to test if yanks want to buy from you?

If the answer is no, then I highly recommend you don’t start focusing on the US until you have done the above.

I’ve seen a lot of eCommerce businesses (very well known brands here) try and fail, because they under estimated the scale of the challenge.

Is your store suited to the US?

I often joke on Boom Ecommerce that yanks just want to teach Aussies to sell thigh masters via drop shipping.

Us Aussie are more genuine. After living in the US I saw first hand how different the culture is there and what buyers respond to.

For example, in most cases people in the US won’t care that it’s Aussie made, although that can work well here. You’re sales pitch often has to be over confident and loud.

Unless you have a uniquely Aussie product that yanks want, it’s basically like starting all over again.

Remember how hard that was setting up and find the sweet spot to grow you business here?

I’m not saying don’t do, but just realise what a huge undertaking it is selling in the US from Australia.

How to start selling in the US

Firstly you’ll need a US version of your site. Because the good old US have come up with their own version of English, it’s called English US.

In S’tray we use Commonwealth English or English UK.

Side note, when I lived in the US someone asked me where my accent was from, I said England (I grew up there), they then asked me where I learnt English!!!!!

If your website says your product “colour” is X, they will think you have typos. They spell it “color”.

US dates are month/day/year, not day/month/year.

Another side note, my birth is on the 16th of the month. I went to a bar, they ID’d me and said you have a fake ID, there is no 16th month!

As I said, the US is different to S’traya.

So you have a dedicated US site, with…

Now you need to start running ads to get traffic. Pick a state that you have already made sales in organically (they just found you and somehow managed to order from you paying more for shipping than the actual product, you know the ones).

Limit your ad targeting to that state or city.

Make sure you do loads of remarketing as most people won’t of heard of you and will need some convincing.

Run it for 2 months and see what lands.

If you make sales, scale ad spend and expand other marketing.

If you don’t make significant sales you’ll need to find out why US consumers don’t want to buy from you. Which is literally the million dollar question, and never easy to answer.

Your best source of ad copy is customer reviews.

It tells potential customers what to expect in their own words.

Not marketing or your industry jargon.

“Our T1000 dog treadmills are the best because of our T4478 technology we developed, you see it works likes this…. [Insert far to much detail you care about but 99% of customers don’t]”

If your reviews suck, focus on fixing the problem there before you pour more effort and money into ads.

If your eCommerce store is built with Shopify and you’re using Google Shopping ads, this tip is for you.

It’s really easy to setup (guide to setting up Google Shopping with Shopify).

However, because it’s relativity easy to set up, store owners often overlook some important settings.

Opportunity to beat your competitors

A quick win is making your product titles more appealing to potential customers.

Google Shopping product titles are the blue text under the product image (see below). 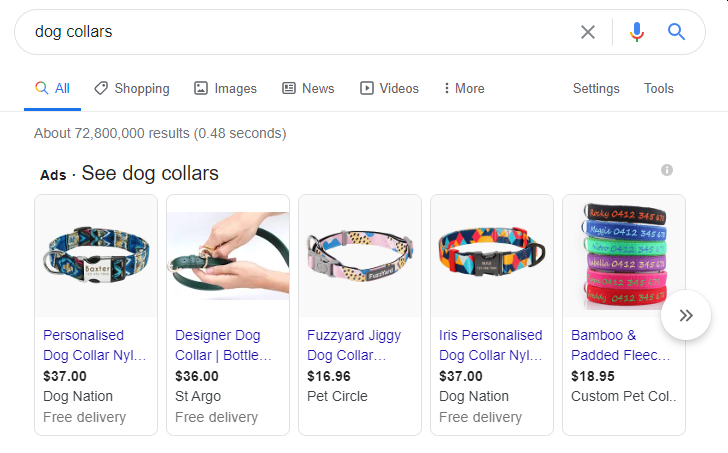 The product title is really prominent. Make sure they explain how your product solves their problem.

For those of you on Shopify, this is a pretty easy and really quick win.

Check you have the “Google” App installed.

This sends your product information to “Google Merchant Centre“.

If you don’t have the app these instructions might not work for you.

Step 2. Check what product info is getting sent to Google

Then scroll down to “Product settings”.

Make sure the option under “Product Title Preferences” is “SEO product title”.

This means the product title you choose to show search engines (For SEO purposes) will be used for Google Shopping ads, instead of the standard product name.

If it isn’t set to SEO titles, change it and save.

Now we’re going to customise each product title one by one.

If you’ve optimised your product titles before for SEO, you most likely won’t need to to do this, as this will change the SEO titles for each product, not just Google Shopping ads.

However, if in doubt and you get help with your online marketing, check it’s ok to changes these. You could affect your SEO rankings in Google.

In theory, you should be fine, as you’re improving SEO and Google Shopping ads, but you can never be too careful.

With the warnings out of the way, in Shopify go to…

Click “Edit website SEO” and channel your inner Don Draper from Mad Men and show off your advertising skills with Google as your canvas.

The trick is to describe and sell the benefits of a product in a maximum of 70 characters.

For example, instead of

This will be more compelling to potential customers.

Do this step for each product you want to improve results for in Google Shopping.

How do I know it’s worked?

Ultimately you should see more sales through your Google Shopping campaign.

However, this might take a few weeks, depending on how many visitors you get and your ad spend.

Have a look at the Click Through Rate (CTR) of your Google Shopping Ads in your Google Ads account. It should be going up, as more people see your new product titles and choose to click your ad rather than your competitor.